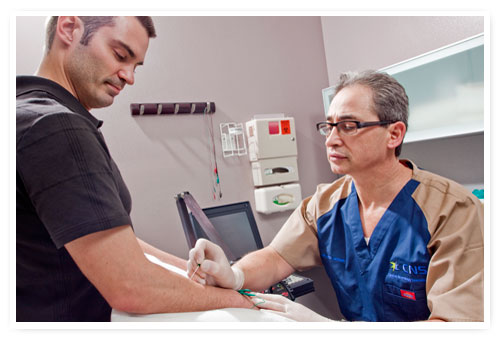 Evidence-based diagnostics because YOU are worth it.

Restoring hope to those without.

lectromyography (EMG) measures muscle response or electrical activity in response to a nerve’s stimulation of the muscle. The test is used to help detect neuromuscular abnormalities.

An abnormal EMG result may be a sign of a variety of muscle or nerve disorders, including polymyositis (an inflammatory muscle disease that causes decreased muscle power), muscular dystrophy (a chronic genetic disease that progressively affects muscle function), myasthenia gravis (a genetic or immune disorder that occurs at the point where the nerve connects with the muscle), and myotonic (stiff) muscles.

A related procedure that may be performed is nerve conduction velocity (NCV). NCV is a measurement of the speed of conduction of an electrical impulse through a nerve. NCV can determine nerve damage and destruction, and is often performed at the same time as EMG. Both procedures help to detect the presence, location, and extent of diseases that damage the nerves and muscles.

EMG is often used along with nerve conduction velocity (NCV) to differentiate a muscle disorder from a nerve disorder. NCV detects a problem with the nerve, whereas EMG can detect diseases stemming from problems with the muscle itself, as well as other problems that result from influences on the muscle from other systems, such as nerves.

EMG may be done to identify the cause of symptoms, such as muscle weakness, deformity, spasticity, atrophy, and stiffness. It may be used to detect whether someone is experiencing true muscle weakness or weakness because of pain or psychological reasons.

Conditions that may require EMG testing